Have news about the Manifesto and other STEPS Centre projects sent direct to your in-box by subscribing to our quarterly newsletter. Just enter your email in the green box on the right.

Melissa Leach, Andy Stirling and Adrian Ely will be presenting the New Manifesto in Paris on the afternoon of 6 January.

The discussion (in French) will invite responses from French government and non-governmental stakeholders, and will focus on domestic implications of the manifesto as well as international opportunities.

END_OF_DOCUMENT_TOKEN_TO_BE_REPLACED

Innovation, Sustainability, Development: A New Manifesto was originally published in English, but the Manifesto project has involved discussions in many countries.

We would like people around the world to be able to join in the debate and action, so the following translated versions are now available:

English version
The original version in English is also available to download or order as a printed booklet.

On 14 June 2010, the eve of the New Manifesto launch, the Royal Society hosted a discussion about the politics of science and innovation for development. The title was “Science and Innovation for development: Where have all the politics gone?”. The speakers were Prof Andy Stirling, co-director of the STEPS Centre, and Dr Lidia Brito, Director of Science Policy at UNESCO.

This “Policy Lab” event is one of a series hosted by the Royal Society’s Science and Policy Centre.

Prof Andy Stirling: Science and innovation for development: Where have the politics gone?
Dr Lidia Brito: STI for social justice and sustainable development: a New STEPS Manifesto for Global Science

At the Royal Society in London on 15 June, the Manifesto was launched with a set of provocative and passionate responses by speakers from around the globe.

Now all the presentations, and the questions which followed them, are available to watch online at our blip.tv channel. Direct links to the individual videos are below.

END_OF_DOCUMENT_TOKEN_TO_BE_REPLACED

The launch of Innovation, Sustainability, Development: A New Manifesto was held at the Royal Society in London on 15 June 2010. 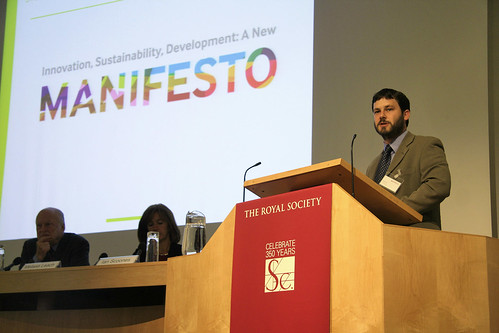 Video from the launch is also available.

The Manifesto launch was co-supported by UKIERI.

We live in a time of unprecedented advances in science and technology. The world is ever more globalised and interconnected. Yet poverty is deepening, the environment is in crisis and progress towards the Millennium Development Goals has stalled.

Meeting the interlinked global challenges of poverty reduction, social justice and environmental sustainability is the great moral and political imperative of our age. Science, technology and innovation of many kinds have essential roles to play in this. But along with many others, the STEPS Centre believes that this imperative can only be fulfilled if there is a radical shift in how we think about and perform innovation.

We need a new politics of innovation. Such a shift is possible, and in inspirational initiatives around the world, it is underway. Innovation, Sustainability, Development: A New Manifesto intends to provoke more vibrant and explicitly political debate and to catalyse action.

You can now watch the Brighton debate which followed our roundtable on 15 March 2010. Entitled “Innovation, Sustainability, Development: A Manifesto for Brighton and Hove”, the debate brought together a panel of local political candidates to answer questions from the public.